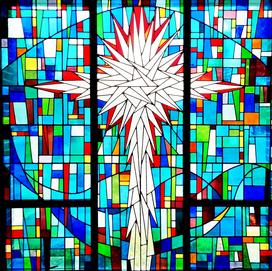 Rev. Robert H. Lewis was born September 27, 1955, and grew up as a Methodist in  Baltimore, Maryland. He earned his Bachelor’s degree in psychology in 1977 from West  Virginia Wesleyan College in Buckhannon, West Virginia. He worked for two years in a  state hospital in West Virginia and three years in an outpatient clinic in
Pittsburgh. Rev. Lewis met his wife Barb while they were doing volunteer work at Forbes Hospice in Pittsburgh. Mrs. Barbara (Shigo) Lewis is a native of Hazelton, PA. They married in 1982 and have 2 adult children, Christopher and Katrina.

Rev. Lewis earned a Master's degree in Divinity in 1986 from Wesley
Theological Seminary in Washington, D.C. While he was in seminary, he served as a student pastor at a Disciples of Christ church in Rockville, MD from 1983 to1985. He then studied for a year in clinical pastoral education at Washington Hospital Center in Washington, D.C. He became a probationary pastor in 1986 and was ordained an elder in 1988. Reverend Lewis was appointed in 1986 as Associate Pastor at First UMC in Irwin, PA, where he served that congregation for four years.

In 1990, he began a ten-year pastorate at Cascade UMC in Erie.
In 2000, he moved to Masontown in southwestern Pennsylvania and served  nine years as Pastor at Masontown UMC. In March 2009, he was appointed to be the new pastor at Lakewood and returned to the Erie area in the summer of 2009.

The Lakewood congregation is very blessed to have Bob & Barb Lewis with us.  Reverend Lewis is a talented leader known for his friendly, outgoing persona, his  fostering of personal face-to-face relationships and his caring touch for all members of  the church.

Pastor Bob conducts traditional worship services featuring both the old-style Methodist  hymns and some praise songs, and enjoys telling lighthearted jokes to start his  sermons. He is also known as Pastor Bob or “PB” to the children. If you'd like to speak to Pastor Bob (or Rev. Lewis) you may call him (833-4131) or email him at pastor@lakewooderie.org.